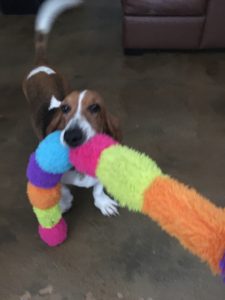 Unsure owners often ask me if it is OK to play tug with their dogs. Will it lead to behavior problems? Teach the pup to be aggressive?

Done correctly, tug is a fun and appropriate way to interact with your dog, and can burn energy, increase your bond and be used as a reward for a command well done.

So go ahead, enjoy a tug session with your dog, just follow these rules!

*A note on growling. Growling is a normal part of play but sometimes can be difficult to interpret. If you dog begins to growl during a tug session take his overall body language into account. Is he happy and bouncy, with a relaxed body? He’s just having fun.